As rational adults who just happen to be dog owners, we all know that you should never leave your dog inside the car on a hot day. Right? However, people still do it. (Even dog “experts” make mistakes and use poor judgment sometimes too.)

So, from one dog owner to another, please don’t leave your dog in the car on a warm day — even if the windows are rolled down. It’s animal abuse.

Leaving your dog in the car during the summer (even when it doesn’t seem all that hot to you) is similar to putting your dog inside of an oven! Seriously. The temperatures heat up so quickly that your dog becomes completely helpless when trapped inside the car on a hot day.

Believe it or not, leaving the windows partially open is NOT enough. Parking in the shade WON’T keep the car cool enough either.

Dogs feel heat differently than humans do. They sweat differently too. Dogs sweat by panting and by sweating from their paws. However, a dog trapped in a hot car cannot effectively rid its body of enough of the heat by panting and sweating — simply because there’s not enough cool, fresh air to replace the heated, stale air. Therefore, a dog breathing in warm/hot air for too long will suffer heatstroke …and could die.

In simple terms, heatstroke occurs when a dog loses its natural ability to regulate its body temperature. Dogs don’t sweat all over their bodies the way humans do. Canine body temperature is primarily regulated through respiration (i.e., panting). If a dog’s respiratory tract cannot evacuate heat quickly enough, heatstroke can occur. Source

In a matter of just a few minutes, a dog can be overcome by the heat. It’s no joke. Temperatures in a closed automobile will rise approximately:

The Animal Protection Institute (API) conducted their own study that showed that deadly temperatures can quickly build inside a closed vehicle, even with moderately warm temperatures outside. The study found that even at 9 a.m. with an outside temperature of 82 degrees, the closed automobile registered 109 degrees inside … The API’s study also measured vehicles with cracked windows. With 4 windows cracked, an 88-degree day outside turned into a 103-degree sauna inside the vehicle at 10 a.m.  Source

Just like kids trapped in a hot vehicle, dogs simply cannot withstand those high temperatures when confined in a small, enclosed space. My Experience With A Dog In A Hot Car

While grocery shopping on a summer day when the temperatures were in the high 80’s, a woman pulled into the parking spot next to the one I was leaving.

I noticed she had a full-grown German Shepherd in the back seat. The car windows were up, and the air conditioning was on inside her tiny 4-door vehicle as she pulled into the parking space.

Then, I noticed that she began cracking the windows (barely 1 inch each) and started walking into the store. I immediately stopped her in her tracks and said, “It’s too hot for him inside the car like that!”

She looked embarrassed and said to me, “I know, but I’ve just got to run in and get some spray cleaner real quick.” She glanced around, as if to indicate that she had no other option, then she hurried into the store. I just stared in amazement. I certainly didn’t want to leave the dog alone like that!

My first thought: “Why did you have to bring the dog when it was so unbearably hot outside today, knowing that you were going to be leaving him in a hot car with the windows mostly rolled up?”

I honestly did not know what to do. I hesitated on calling 911 because I feared that:

I should have offered to stay with her dog — with the windows rolled way down and me there to make sure he didn’t escape. Or, I could have walked him outside on a leash or something. But then there are all the trust issues that arise with someone whom you don’t know being in charge of your dog.

Instead (and I admit I feel terribly guilty that I didn’t immediately choose one of the 2 options mentioned above), I parked my car nearby and watched and waited for the lady to return. My plan was to call 911 if the dog started to show signs of distress or if the dog’s owner took too long to return.

Fortunately, she returned within about 6 minutes with the single item that she had purchased. (Those seemed like the longest 6 minutes of my life. Just imagine how it felt for the dog!) The lady definitely was in a hurry to get back to her car, where she quickly proceeded to roll down the windows and turn on the air conditioning to let the dog breathe in some fresh air.

If nothing else, I hope that I was able to plant a seed in this lady’s mind that it’s not okay to leave your dog trapped in a hot car. Hopefully, she won’t want to be “embarrassed” like that again, so she’ll choose to leave her dog at home instead the next time.

Still, I was left questioning my own actions. And feel terrible to this day that I allowed that dog to be left in a hot vehicle for even 6 minutes.

My situation was very similar to this one:

It happens more often than you probably realize.

Need proof? Just read all of these comments!

The reason I’m writing this post today is to possibly help someone else who might find themselves in the same situation that I was in — as a witness to a dog left in a hot car.

Still, it’s up to those of us who see these things to look out for dogs when their owners simply don’t take the time to think about what could happen if their dog remains inside a hot car for too long. (In case you’re wondering, irreversible brain damage and kidney failure could occur… even death!)

Save a life by speaking up! If you do come across a pet alone in a car on one of those hot summer months please alert the store manager. If the owner does not return promptly, call your local animal shelter or the police ASAP. Let’s protect our furry friends this summer.  Source

Here’s what you should do if you see a dog in a hot car, plus even more advice from the Humane Society of the United States.

You may also want to distribute flyers in your neighborhood or leave them on dog owners’ windshields: 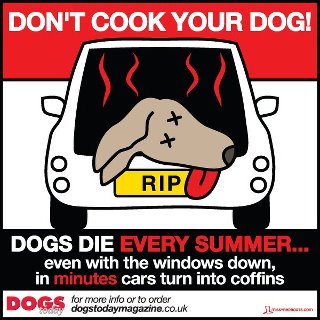 To be honest, it’s a little difficult to find out whether it’s technically illegal or not to leave a dog in alone in a vehicle in different states.

There are 5 different sources for animal laws in most states:

Not to mention the fact that the laws in your city could actually conflict with the state laws regarding dogs.

The question implicates the issue of preemption:  whether a lower local law is “trumped” by a higher state law.  If the two laws do not conflict, there is not a problem and both laws must be followed.  If, however, the lower law tries to regulate something the higher state law already regulates, then the lower law has been preempted.  State laws usually give great deference or authority to local units to regulate dogs.  But laws that deal with complex and far-reaching issues such as rabies quarantines and dangerous dogs may be exclusively up to the state to regulate.  The local government may be able to help you sort out the conflict in laws.  If following the lower law has led to further problems for you or if you feel following the local law may contradict the state law, consult an attorney.  An argument of preemption may help to invalidate a local law that stretches the municipality’s authority to regulate.  Source

Obviously, I realize that there’s no way that a dog being left in a hot car would ever be viewed as the right thing to do. But still… it would be nice if animal cruelty laws were clearer and more readily available to everyday citizens. Not only would this benefit current dog owners (and future ones), it would also aid those who happen to witness a dog being left in a hot vehicle. I think people would be more inclined to speak up if they knew they had the law on their side.

UPDATE: Where I live in Tennessee, a law was recently passed to protect dogs left in hot cars. In 2014, the “Good Samaritan Law” took effect, allowing people to break into a car if they see a child trapped inside a hot car. Starting July 1, 2015, that law also includes animals. What About A Dog In The Car With The Air Conditioning Running?

Many people do this, but tragedy can strike — and it has. For example, in 2003, a police dog in Texas died after the air-conditioning in the patrol car shut down and began blowing hot air. The air system’s compressor kicked off because the engine got too hot. Many cars, including modern models with computerized functions, are prone to the same problem. In August 2004, a North Carolina couple lost two of their beloved dogs, and nearly lost their third dogs, as result of a similar failure. They had left bowls of water and ice in the car, and the air-conditioning on, during their shopping trip of less than 30 minutes. Source

Finally, check out this video by veterinarian Dr. Ernie Ward as he puts a hot car to the test:

Here’s more proof that dogs die in hot cars — even with temperatures in the 70s!

UPDATE: You never know when you might have to break into your own car… like Carrie Underwood did when her dog locked the car doors on a hot day with her baby inside!

Dog Joint Pain: What To Look For & How To Treat It Naturally

Dog Epilepsy: What Dog Seizures Look Like & What To Do During A Dog Seizure